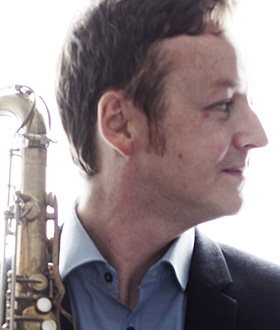 After a long search for the right soprano saxophone mouthpiece I’m delighted to have found the AIZEN SSSO. It’s a joy to play, with a warmth and darkness of tone throughout the lower register alongside just the right amount of power and projection across the range. An incredibly responsive and free blowing mouthpiece, it gives me just what I was looking for, control, ease of playing and an impressive depth of sound. I can’t recommend it highly enough. Thank you AIZEN!

‘Molley’s tone is gorgeous, he never wastes a note’
-All About Jazz

‘Molley is a muscular player yet his tenor sax sang beautifully, sultry and lyrical’  The Scotsman

Brian Molley works as a freelance saxophonist, composer and teacher and is based in Scotland.

Brian studied music at The University of Glasgow and The Royal Scottish Academy of Music and Drama. Whilst completing his studies at the RSAMD on an Academy Trust Scholarship he was a finalist in the Haverhill Sinfonia International Soloist
Competition, runner-up in the Saxophone and Clarinet Society’s Young Player Competition and winner of the RSAMD Governors Recital Prize for chamber music. During this time Brian also performed the world premiere of Michael Spencer’s saxophone concerto “…los redes des piedra…” with The Kelvin Ensemble/Garry Walker.

Career highlights to date have included working in London’s West End and on Broadway, New York on the National Theatre of Scotland/Improbable production The Wolves in the Walls. In 2009 Brian was invited by Moroccan charity Terre Sans Frontiere to take part in And’Art, a 10 day collaborative project between Moroccan and International musicians, artists and film-makers, based in Tangiers.

In 2010, as a member of The Raymond Scott Project/Stu Brown Sextet, Brian was commissioned by the Scottish Arts Council to produce an arrangement of Scott’s music. Portofino was premiered at Gateshead International Jazz Festival, March 2010. It has since been extensively toured throughout the UK. The Raymond Scott Project has performed at many prestigious UK venues including the Purcell Room for London Jazz Festival, as well as at Manchester, Glasgow, Edinburgh and Cheltenham Jazz Festivals.

In spring 2013, Brian recorded his debut album as a leader with Tom Gibbs on piano, Mario Caribe on bass and Stuart Brown on drums. Featuring 8 original compositions alongside 2 arrangements of classic standards ‘Clock’ was released to critical acclaim on 14th October, 2013.
2014 sees the quartet appearing at Manchester Jazz Festival and at the Edinburgh Fringe as part of the prestigious Creative Scotland curated ‘Made in Scotland’ programme. The band will be on tour throughout the UK in the autumn.