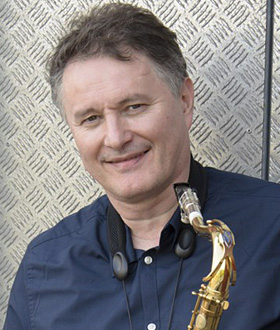 I received the mouthpiece and I’m really delighted!
The tenor TSLS is incredible. The soprano SSLS is the perfect for me.
I have no word to explain my gratitude: Bravo (I said in french!!)
I’m very happy to play your mouthpieces, it’s a revelation!!

In 1992 he started leading his own group writing rich and poetic music based on his experiences of the moment.He played his first quartet with Bojan Z, Christophe Wallemme and Stephane Huchard.

His first recording with Impro Primo awarded him with two prizes, the prix Django Reinhardt in 1993 and the Django d’or du 1er album: it was also at that time that he met the journalist and producer, Jean Michel Proust.

In 1995 he took part in Andre Ceccarelli’s quartet for whom he composed and recorded three albums.

In 1997 he signed a contract with the label RDC for five albums with producer Franck Hagege. His first album La danse des internotes with a quintet and pianist Manuel Rocheman was critically acclaimed in the media FFFF Telerama.

In 1999, he met drummer Franck Agulhon and bassist Diego Imbert and joined them in a trio, an ensemble that one of his favorite saxophonist exceled in: Sonny Rollins.

A major hit with the album Trio awarded him in 2000 the “Choc” of the year in the Jazzman review as well as the prize Victoires de la musique in the New Jazz Talent category.

He successfully released the albums Soul notes in 2003, Octovoice in 2004, Another Building in 2005 and Mondes Paralleles in 2007 for which a great number of French soloists were invited to play; Michel Perez, Andre Ceccarrelli, Jean-Pierre Como, Denis Leloup, Damien Argentieri, Frederic Delestre, singer Laura Littardi as well as his friends Diego Imbert and Franck Agulhon.

When he met trombonist Denis Leloup in 2009 a sextet was created including saxophonist Pierrick Pedron with pianist Jean Yves Jung and his trio. He decided to record for the first time a live album, Joy, which, when released, was depicted as an album of maturity by the FFFF Telerama media.

In 2010, he set up a septet, Septissimo, with guitarist Michel Perez and played as a resident at the Parisian club, “Les 3 Arts”.

Ongoing with his creative projects, Sylvain Beuf has also been an educator for the past fifteen years. After three years performing in France and in Europe the group’s upcoming album Plenitude is scheduled for release in 2015.

Sylvain Beuf, who never ceases to amaze us, has developed a wonderful musical identity and pursues an active career as an eclectic musician, a prolix composer and an inspired soloist.