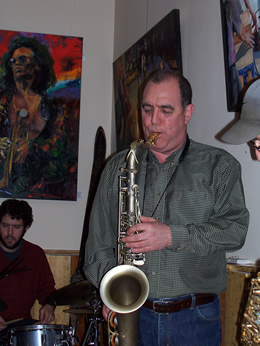 You know how it is when you try a (good) new mouthpiece. The initial reaction is often ・ｽgWow, this is it, the answer to my prayers・ｽh, and then a few weeks later, you・ｽfre back playing on your old one, after the honeymoon is over. With the Aizen tenor, (7*) the opposite thing happened. My first impression was a little uncertain, it seemed a little too dark and resistant, even though the reed felt OK. I kept playing it a bit each day, and began to like the darker sound more and more. I ordered some softer reeds, feeling they would work better, and Hey Presto, it sprang to life. That dark core was still there, plus a lovely clarity and focus, with plenty enough projection. Since then I have done two big Band gigs, a quintet gig, and a recording for BBC Wales with it, and it feels great. I have never owned a Slant Sig rubber Link but played an EB for a few years, and this at least matches it. This is a very fine and versatile mouthpiece. Since getting used to it, I have moved back to my usual strength of reeds, and it plays really well, nice and fat. The relationship was worth working at!!!

In contrast, I liked the Aizen alto straight away. This is modelled on the vintage New York Meyer, and again it seemed to work better for me with a slightly softer reed. It plays as a good Meyer should, but with (seems to me) more edge, and really effortless altissimo, making it great for fusion, pop, as well as lead alto and jazz. I have just played a week in the theatre pit with it; it felt both comfortable and effortless. (Honeymoon is over, still loving it). I have 2 other great Meyers, customised by two of the most well known names, and this Aizen is at least a match for them.

He plays in a variety of situations. Over the years I have worked with and played alongside some greats. Stan Tracey, Peter King, Bobby Shew, Scott Hamilton, Loren Schoenberg, Lew Tabackin, Dusko Goykovic, Alan Barnes, Steve Waterman, amongst others. He has a successful teaching career, one of his former pupils, Osian Roberts, has recently recorded a CD in New York with Cedar Walton, soon to be released.

He plays more commercial music also, theatre work, function bands,TV, and regularly work as an extra with the BBC National Orchestra of Wales. and He is musical director of the Big band at the Royal Welsh College of Music and Drama, our National Conservatoire here in Wales.