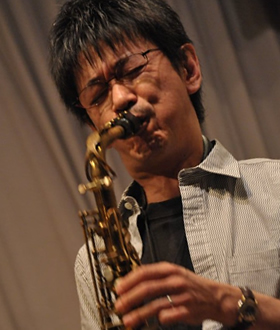 I get a great feeling off this piece. The flow is really good, and I get the feeling that this is a great shortcut to good results with a jazz mouthpiece. It’s a simple, straightforward piece of work. The range in the higher octaves is very broad, so I can really hear what I’m playing, and I can get the sound out with a lot of punch.

The tone is light and delicate (in the good sense), kind of dry. You get a consistent sound no matter where you’re playing, and you get good projection whatever the venue.

The sound kicks in right from the word go, and I think that’s great. It’s very responsive to changes in volume, so you can go loud or soft without having to worry. The dynamic range is broad, with great balance and pitch.

About the materials normally, if you’re using a plastic mouthpiece, most of the time you get this feeling of rigor mortis off the piece. Way too hard. And when you’re playing, you can’t really feel the vibrations from the piece in your mouth. But with the Aizen Jazz Master model, you get to feel the vibrations as you play. How will I put it? It’s like the air around your face has been infused with the tone of the music.

The quality is very good, and you can really depend on the Aizen. I can recommend this piece to everyone, beginners included. This is a piece you will treasure.

Atsushi was born in Yokohama in 1963, and is a graduate of the Kunitachi College of Music, where he majored in instrumental music. He started playing concerts while in college, with fellow-students like Yutaka Shiina (piano), Issei Igarashi (trumpet), and Yosuke Yamashita (piano).

Chosen as Best Soloist in the Yamano Big Band Contest in 1985, Atsushi moved to the United States in 1990. He picked up a lot of different influences through his musical partnership with the trumpeter Marcus Belgrave. By 1996, he was back in Japan and active in the local jazz scene; his album Everybody’s Music was released by King Records in the same year. He joined the pianist Fumio Karashima’s group in 2003, and released the solo sax album Kahataretoki the following year on the Objet Cafe label. This was followed in 2005 by Interlude, a collaboration with pianist Masahiko Hosokawa on the CMS label. The following year, Atsushi teamed up with Makoto Ozone and No Name Horses at the International Association for Jazz Education in New York.