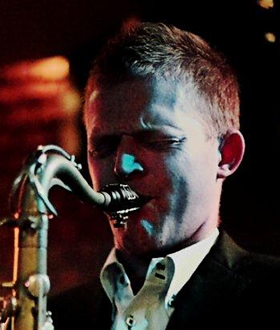 Just a note to say THANK YOU so much for sending the Aizen SO pieces.

So far I have only had time to play the tenor mouthpiece in a gig setting but it really adds an extra dimension to the sound and I have had many compliments on my sound since I started using it. I really really like this piece! It is very colorful and responsive. Actually I have owned four or five vintage Selmer Soloists but the Aizen offers a more colorful and malleable sound.

Simon was born in England in 1982 and started playing saxophone and piano at an early age, winning national prizes and touring Europe and the USA. In 2000 and 2002 he was a national finalist in the BBC Young Musician of the Year competition, scooping the Walter Todds Bursary for outstanding musical promise in 2000.

From 2000 to 2003 he studied music at Cambridge University and won various awards for academic and musical achievement. Director of the University Jazz Orchestra and other musical societies, he was invited to perform in New York in 2002 at a concert to commemorate 9.11.

Simon developed an interest in Japanese music and culture and came to Japan on the prestigious Daiwa Scholarship in 2003. He took up the shakuhachi in December 2003 and studied Japanese to advanced level, passing the highest level of the JLPT proficiency test in 2007.

Simon is in demand as a saxophonist and pianist on the Tokyo professional jazz circuit. He leads his own quintet, and has played with such acclaimed artists as the Duke Ellington Orchestra, Martha Reeves and Scotty Wright. Simon recorded his debut album in 2009 and has recorded with numerous artists in Japan and Europe.

In addition to nationwide engagements as a freelance performer, educator and translator, Simon is featured as a pianist in the Japanese movie Tsuri Baka Nisshi (2005) and as a saxophonist in a commercial for Yoshinogawa (2008).