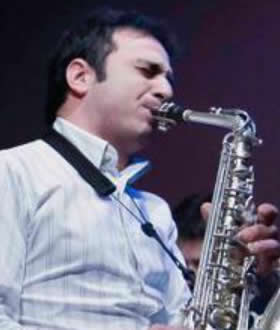 NOW, WITH MY AIZEN’S MOUTHPIECE, I FEEL FREE TO EXPRESS IN MUSIC EVERY SIDE OF MYSELF AND TO EXPERIMENT, WITH FACILITY, NEW AND PERSONAL SOUNDS.ﾂTHANK YOU AIZEN!!!

窶廾ne of the best new Italian jazz talents to emerge in 2010/2011窶・ according to the charts of 窶廴usica Jazz窶・magazine,Gianni Denitto comes to jazz with a wealth of experience in classical, electronic, and rock music.

At the age of eighteen, Gianni played clarinet in the Philarmonic Orchestra of Turin, whilst studying other musical styles and other instruments. With Ossi Duri, a Frank Zappa’s influenced band, he played clarinet, alto sax, electric guitar and effects, and also sang. The group recorded “X, Ten Years Later窶・with Ike Willis and Mike Keneally in 2003, and in 2005 “Gnam Gnam” with Elio from Storie Tese. With the electronic band Phone Regis, Gianni recorded “Piceno On The Rock” and in 2006 “Non Solo Rock”, with Morgan and Planet Funk.

In 2002 Gianni completed a Bachelor Degree with honours on clarinet at the Giuseppe Verdi Conservatory in Turin.In 2005 he was introduced to Furio di Castri, who influenced his decision to pursue jazz music.In 2007 he earned a Bachelor Degree in Jazz, again with honours, at the same conservatory. He came to realise that jazz was his true passion and after listening to the legendary Italian saxophonist, Massimo Urbani. In this period he choose alto sax as his instrument, focusing on his acoustic sound and feeling with improvisation.

ﾂ Gianni then attended several masterclasses, such as Siena Jazz, with Enrico Rava, Franco D’Andrea, Gianluigi Trovesi, Mauro Negri and David Liebman. In 2009 he chose to make his first journey to the real jazz centre of the world: New York City. He spent two months there, playing every night in the classic afterhours jam sessions, alongside Stacy Dillard, Roy Hargrove and Harry Whitaker, attending the masterclasses conducted by Steve Colaman and Barry Harris. Returning to Turin, his approach to jazz music was different, and soon he wanted to record various projects, as a leader and co-leader. With Jazz Accident, a classic quartet with alto sax, piano, double bass and drums (Fabio Giachino, Marco Piccirillo and Paolo Musaro), he recorded two albums; the first of which was voted amongst as 窶弋he Best of 2010窶・by Musica Jazz Magazine. The second album, entitled “Play Mobil”, was recorded with the famous Italian trumpet player, Fabrizio Bosso, and was released on the Abeat record label. Soon after, Gianni decided to put together all of his musical experiences thus far, recording his first album as a leader. In February 2011, this project was realized, with the release of the album “Remixin’ Standards”, with Furio di Castri, Luca Aquino, Andrea Bozzetto, Mattia Barbieri, and was released by Universal Music Italia. As the title explains, the music is personal interpretation of jazz standards, with stylistic crossovers into rock and electronical music.