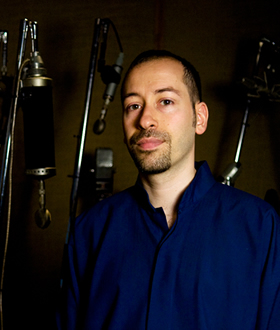 “The Aizen tenor mouthpiece works extremely well in all registers, it sounds great and projects very well. It’s even, balanced, easy to play and it has just the right amount of resistance. It allows the player to shape the sound much in the way that the great mouthpieces of the past do. I very much recommend it.”

・ｽgMr. Sabbagh played with untroubled self-assurance, and his songs had a sleek and sturdy appeal. […] What he is working toward, simply and effectively, is a sincerely personal vocabulary.・ｽh
-New York Times

・ｽgThe willfully lyrical tenor saxophonist Jerome Sabbagh is the rarest of rare birds: a young tenor saxophonist with a distinctive concept, dependent not so much on his elders for inspiration as his own imagination.・ｽh
-JazzTimes

Saxophonist and composer Jerome Sabbagh was born in Paris, France in 1973 and moved to New York in 1995. There he formed the collective Flipside with guitarist Greg Tuohey, bassist Matt Penman and drummer Darren Beckett. They recorded an eponymous album for Naxos Jazz. Since then, Jerome Sabbagh has been writing music and leading his own bands, recording three albums as a leader, One Two Three, Pogo and North. As a sideman, Jerome has been involved with pianist Laurent Coq’s quartet and Guillermo Klein’s Los Guachos. He has also played in bands led by Jean-Michel Pilc and Magali Souriau.